For our future – we demand a People’s Vote 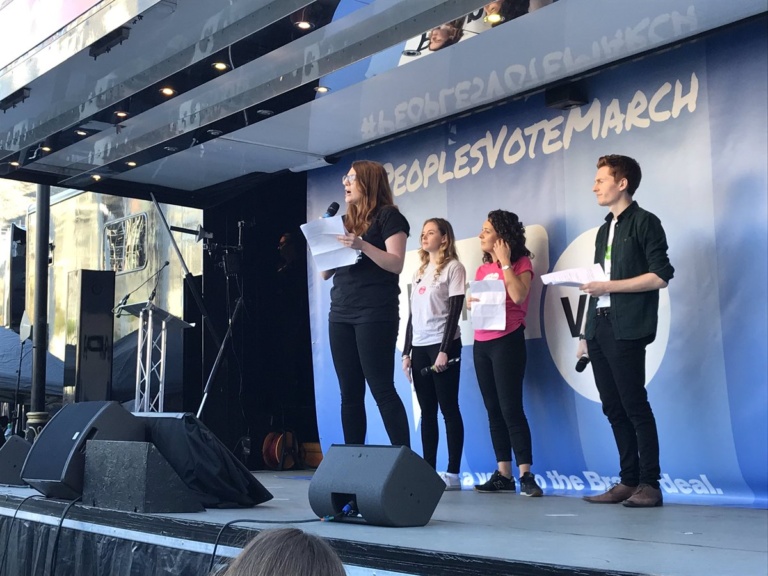 Why are you here today? Hope for a better future? To change the course of history? To deliver the democratic People’s Vote we demand and deserve?

From every corner of the country we have travelled here. And together, we cannot, we will not, be ignored.

From the furthest tip of north Wales, the island of Ynys Mon, I have travelled here with many others.

Wales has a proud strong history, heritage and culture. A nation where the roads are long, and the valleys wide. Where the British Political Establishment is far far away from the realities of our people.

And the journey we have travelled, has been long. Not just on coaches, trains and cars to get here today.

But in 6 months –  look at how far we have come. We can see from our nation that the Brexit being delivered is a million miles away from what was once promised.

Because the Brexit Elite; The Pale Male and Stale told young activists, young women like me to sit down and shut up. But Brexiteers, you hear me, hell hath no fury like women ignored.

They told all of you that the fight was over, the cause lost.

Well let’s tell them that the quarter of a million people here today have a very different view.

A fortnight ago I proudly witnessed my party Plaid Cymru – The Party of Wales overwhelmingly support a People’s Vote.

We stand together with you – we demand a People’s Vote so that we can stop the Brexit catastrophe.

We know that Brexit will hit the vulnerable the hardest, for the longest. Women bearing the brunt of Boris Johnson’s shortcomings, people of colour living with the consequences of Nigel Farage’s lies, the working classes, living in Jacob Rees-Mogg’s brave old world.

Democracy means we do not have to accept their vision of the world. So to all of you I say let’s fight for a better future. Er lles dyfodol pawb! For all our Future’s Sake!