Catalonia – a year since the referendum

Our international affairs officer, Llyr Williams from Preseli, looks back at a year since the independence referendum in Catalunya.

After the unilateral declaration of independence on the 23rd of October, the Spanish Government implemented article 155 of the Constitution, assuming direct rule of Catalonia’s government and institutions as well as sacking government ministers, jailing of key Catalan politicians and civil society figures; others including the president Carles Puigdemont fled to Brussels to escape Spain’s heavy handed measures.

Due to the implementation of article 155, elections for the Catalan Parliament were held on the 21st of December. The two main nationalist candidate lists, ERC-Cat Sí led by Oriol Junqueras, the vice-president of Catalonia imprisoned in Madrid before the election and Junts per Catalunya led by Carles Puigdemont from Brussels both increased their vote share and number of seats despite lists containing jailed and exiled politicians. The unionist Ciudadanos (Citizens) party managed to galvanise the unionist vote to become the largest party after the elections, leaving the then Spanish President Mariano Rajoy’s Popular Party with four seats, the lowest ever number they have held in Catalonia. Despite Ciudadanos becoming the largest party, the three pro-independence parties together gained an absolute majority of seats in the chamber.

Following the elections, there were a number of attempts to elect a new president and form a new government, to release Catalonia from Spanish direct rule. Attempts to elect Carles Puigdemont were halted by Spain’s Constitutional court due to the fact he still faces several charges relating to his role in organising the independence referendum and Unilateral Declaration of Independence a month later. Spain also blocked the attempt to elect Jordi Sànchez, president of Assemblea Nacional Catalana and second on Carles Puigdemont’s election list. the CUP party’s abstention denied Jordi Turull’s attempt at being elected president, the night before he was imprisoned along with a number of other Catalan politicians for their role in the referendum.

Eventually, on the 17th of May, Quim Torra was elected as President of Catalonia, bringing to an end seven months of direct rule in Catalonia, President Torra a former lawyer is a controversial figure with a history having written articles alluding to Spanish speakers in Catalonia, branded by critics as xenophobic. 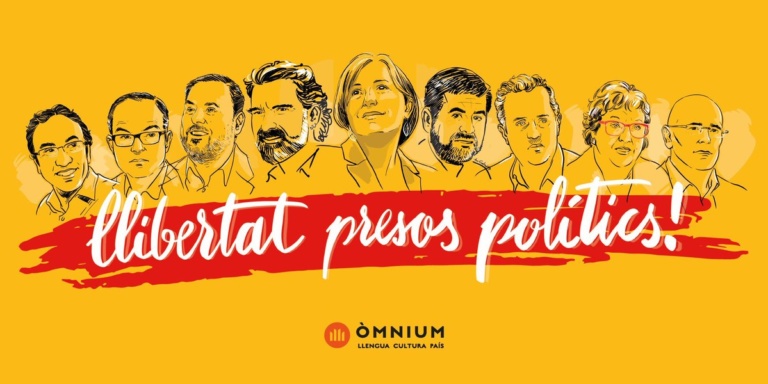 Following the vote to oust Mariano Rajoy, the new Spanish president Pedro Sanchez, agreed to meet with the Catalan president to find a political solution to the Catalan crisis. The meeting took place in Madrid on the 9th of July and was described as “effective”, despite Snr Sanchéz’ refusal to look into the possibility of holding a referendum on independence, President Torra was adamant that any solution to the crisis in Catalonia must include the right to self determination if that’s what the people wish.

A year since the referendum, there are still 10 leading independence figures imprisoned, they are all now held in Catalonia after having been moved from prisons in Madrid closer to home as a goodwill gesture by the new Spanish president. A further six including the former president Carles Puigdemont are still in exile in Belgium, Switzerland and Scotland.

Catalonia is stuck, its people have shown in a referendum that they want independence, but Spain refuses to recognises the right of self-determination. On the 11th of September the Diada or Catalan national day, over a million marched through the streets supporting independence and supporting calls to build the new Catalan republic voted for on 1/10/2017. Time can only tell if the Spanish State will be able to reform sufficiently in order to allow a legally binding poll in Catalonia – however, mountains have been moved with greater ease.