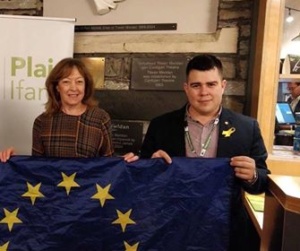 Llŷr is the current international officer for Plaid Ifanc, and was the Plaid Cymru parliamentary candidate for Preseli Pembrokeshire in the 2017 general election.

This Brexit chaos is further proof that Westminster is broken.

In the statement she claimed that she had listened to MPs about their concerns. However, she is pursuing the same old route -one which she has been told time and time again won’t work.

The British Prime Minister’s Plan B is beginning to look an awful lot like the Plan A voted down en-masse by MPs last week and her solution seems to be to go back to Michel Barnier to attempt to renegotiate the unnegotiable Northern Ireland Backstop.
It is painfully obvious that the Prime Minister’s only priorities are to avoid a split in her party, to pander to the wishes of the DUP and to keep her grip on power.

The public are a second thought.

The UK’s political system does not accommodate much for compromise.

Its voting system is “winner takes all” cooperation is frowned upon and when it comes to issues as important as Brexit, it seems the unity of one party STILL is the priority. Such is the lack of compromise within the Westminster political system that the Prime Minister and British government have spent the last two years trying to convince Leavers that they’re “on their side” whilst not taking Remainers with them.

The middle ground, the solution that works best for everyone has been completely ignored.

And now everyone is suffering because of it.

A way forward in this Brexit chaos, is for genuine cooperation and compromise to take place. It’s time for MPs to work together, not against each other. We cannot allow this chaos to continue and hurtle us even further towards a disastrous no-deal scenario. We need to see the Prime Minister drop her red lines, quit the vanity trips to Brussels where she achieves nothing and to look seriously at cooperation.

The ruling out of all options apart from her own needs to come to an end.

At such a critical hour, the Prime Minister needs to stop talking about “people coming together” and actually to start making it happen.
Discussions need to be held urgently on Customs Union membership, to solve the issue of the British border in Ireland. What is a hard swallow for strong Leavers is an easier swallow for those willing to compromise – and the same goes for Remainers.

Whilst a second referendum is the desired outcome for many of us, we need to look at how we can avoid a no deal and even if we leave, ensure that our voice is heard, and we influence the outcome.

This needs to be done now, we cannot afford any more time wasting from Theresa May. The confrontational style of Wesminster’s broken politics needs to go.

A new politics of compromise needs to come in, to end this stalemate, to end the risk of a No Deal Brexit.

And if not… Wales can forge its own path…?

(Disclaimer: This article reflects the personal views of Llŷr Williams, and not the official view of Plaid Cymru)